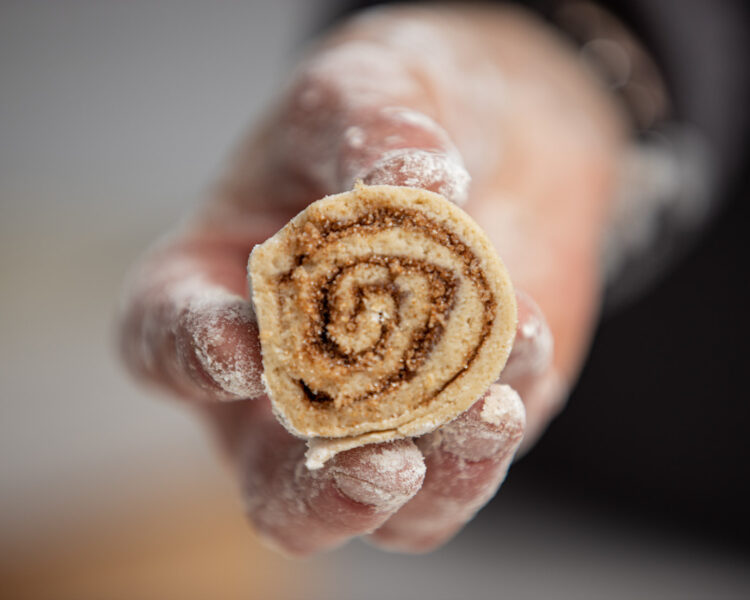 Cinnamon buns.  When you’re gluten free, we swear these incredible rolls taunt you. They seem to be offered in almost every coffee shop, bakery and street food truck and you can’t indulge in any of it ever! This beloved and common sweet bun is something that has taken a backseat in the gluten-free world. We decided this needed changing.

It was Christmas time and the request for Christmas morning cinnamon buns was on the table. Literally. We knew we had a challenge. We game planned and found a solution!  Can’t lie we both LOVE a challenge…and a boy and his momma NEEDED to have a cinnamon bun. We set out to work right away.  Ladies and gentlemen…a Christmas miracle has happened and we’re here to share with you all our cinnamon bun success!! Never again will years, months or holidays pass by without this special treat.

Really Meg! We have some buns to make…LOL.
We have tried and tested this recipe and they’re absolutely amazing! Exactly the taste and texture you’d expect from cinnamon buns, this recipe will not disappoint. We also think it’s safe to say they go well with a glass of orange juice, cup of coffee or glass of wine! Ha!

Here we go…getting started is a bit of a science and although rapid rise yeast doesn’t normally need proofing, we have proofed it to help give an extra ‘oumphf’ with our gluten-free flours.

Make sure you don’t over heat the yeast and that it’s warm enough too – warm the milk, butter and yeast to approximately 110˚F. Whisk all together in an oven safe bowl and place in warm oven. Pull out from the proofing oven when mixture looks similar to below:

While yeast is proofing, pull out your mixer and combine the dry ingredients for the dough.  You’ll only have a few minutes.
When the mixture in oven is proofed, go ahead and add to the dry ingredients.  Gradually combine and mix well!  Gluten-free flours are thirsty and will continue to absorb liquid as you mix.  Be sure everything is combined very well; the dough will seem sticky.  This is OK!

Let’s get rolling and make cinnamon buns! We have learned to place plastic wrap on our rolling surface and then sprinkle flour over top.  This will help you roll the gluten-free dough if it seems sticky (which it should!).  So; plastic wrap, flour, grab your rolling pin and place the dough in the middle to begin.

After spreading the butter, go ahead and sprinkle the cinnamon/sugar mixture evenly all over your dough. Look!  You’re doing it!!

Alright we’re almost finished.  Start at the bottom of the long side of your dough and gently start rolling it up.  Go ahead and use the plastic wrap to help ‘lift the dough and roll’.  Try your best and keep it tight.   If it’s your first time rolling the log and it does’t look tight enough, don’t unroll the dough or you might have a mess.  Just roll with it. Ha! No pun intended. We promise this won’t be your last time making this recipe. The cinnamon buns are THAT good.

Once you’ve rolled the dough, the hard part is over! Prep your pie plate or baking dish with cooking spray and flour.  Then simply make sure you have a sharp knife dipped in flour and slice your log. Keep the pieces about 1 1/4″-1 1/2″ thick. Set them in your baking dish and you’re on your way to eating the most delicious gluten-free cinnamon buns ever!

Cover your buns with a damp towel and let the magic happen by placing them in your warm oven to rise.  After approximately 20 min, uncover the rolls, and turn the oven to 350˚F.  When the temperature has been reached, set the timer for 20-25 minutes.  Is your mouth watering yet? Ours is!

Let’s get making the icing! It’s best to spread when the buns come out hot…Our families both love this icing so don’t mind us….we use a ton!  You don’t have to follow suit- but if you’re dipping fingers in the bowl when the kids aren’t looking…maybe just embrace this sweet topping of perfection and load it on.  It’s Christmas!!!

These GLUTEN-FREE, yes!…GLUTEN-FREE cinnamon buns are a direct replica from those at the mall. We promise our gluten-FULL taste testers were on their best and helped us nail this recipe! It’s dough is soft, it doesn’t fall apart and has the consistency and texture you’d exactly expect from a cinnamon bun. Gluten-free cinnamon buns on Christmas morning might just be the best gift to ‘un-roll’!! You’re welcome 🙂

We promise our gluten-FULL taste testers were on their best and helped us nail this recipe.  Its dough is soft, it doesn’t fall apart and has the consistency and texture you’d exactly expect from a cinnamon bun.  Gluten-free cinnamon buns on Christmas morning might just be the best gift to ‘un-roll’!!
Merry Christmas!